“He’s one of the few people around with the balls to play with his own money. His word carries a lot of weight. He’s personally out on the line. It’s always given me a lot of respect for him. Andy is always involved. He’s your partner or your boss, but he offers guidance as opposed to instructions… He approaches business in a sort of family style. He keeps the same friends for 30 years, and that’s kind of remarkable.”

John McTiernan, director of Medicine Man and Die Hard With a Vengeance

“A very very sad day ... Producer ANDY VAJNA, the man that Made Rambo happened, died today… LOVED this man’s courage - a pioneer. Believed In making FIRST BLOOD when no one else did.…This truly breaks my heart. Rip”

“The profession is never boring. I have found the interesting things in everything I have ever done. So none of my occupations ever seemed like work.”

“I decided to learn something that I could do no matter where I lived – I became a hairdresser. I chose hairdressing because it is a useful skill and one that I could always go back to. Knowing this gave me great security and the freedom to explore other avenues.”

“Andy doesn’t compare to anybody else in this business. Andy is unique, he’s independent; he’s a rare blend of entrepreneur and film maker. He puts his money on the line time and time again, and he’s won as big as anyone in this town. You’ve got to admire somebody like that.”

“Andy Vajna was a dear friend and a revolutionary force in Hollywood. He proved that you don’t need studios to make huge movies like Terminator 2 or Total Recall. He had a huge heart, and he was one of the most generous guys around. I’ll miss him.”

“When you work with Andy, the buck stops with him. I don’t deal with anybody else. It becomes very much Andy’s movie, one singer, one song.”

“He’s got great respect for the director and courage to do projects that aren’t so easy… He won’t let you down; you can trust him.”

“Working with Andy was the best experience of my career and he makes the world’s greatest bouillabaisse.”

“You can’t make an actor act. You have got to create an atmosphere he wants to perform. It can be hell.”

“We’re glad to be a part of your lifetime.”

“Andy Vajna was a great friend and collaborator. He believed in me on one of my toughest shoots, Terminator 2. I will miss him, his humor, class and style, but especially the motorcycle rides.”

“Vajna defined what would become known as the ‘big action picture’. He really has a wide range of talent and ability.”

“I fell in love in love with Andy the moment I met him, because for once I’d met a Hungarian in Hollywood who was not only more successful than I was, but also crazier.”

“When Andy gives you his word, you know it’s good. And no matter how tough the going gets, you can count on him. He’s got nerves of steel.”

In the last 10 years Budapest became the ‘Mecca of filmmakers’, it could also be called ’Budawood’ – in a 12-minute report the most popular French television channel, TF1 went after what made Budapest so attractive for the foreign filmmakers. 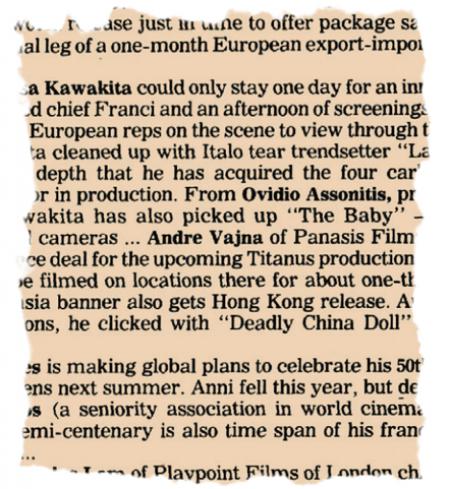 Variety first noted Andy Vajna’s work in Asia during Mifed sales market in Milan in 1974, 43 years ago. On this occasion, he was interviewed by Steven Gaydos, Executive Editor of Variety and shared stories about his early days in the entertainment industry.

The only Hungarian in Variety500

Andy Vajna producer, government commissioner for film industry has been named one of the 500 most influential business leaders in the entertainment industry by Variety. The producer started his carrier in the film industry in the 70s in Hong Kong is the only Hungarian in the prestigious Variety500.